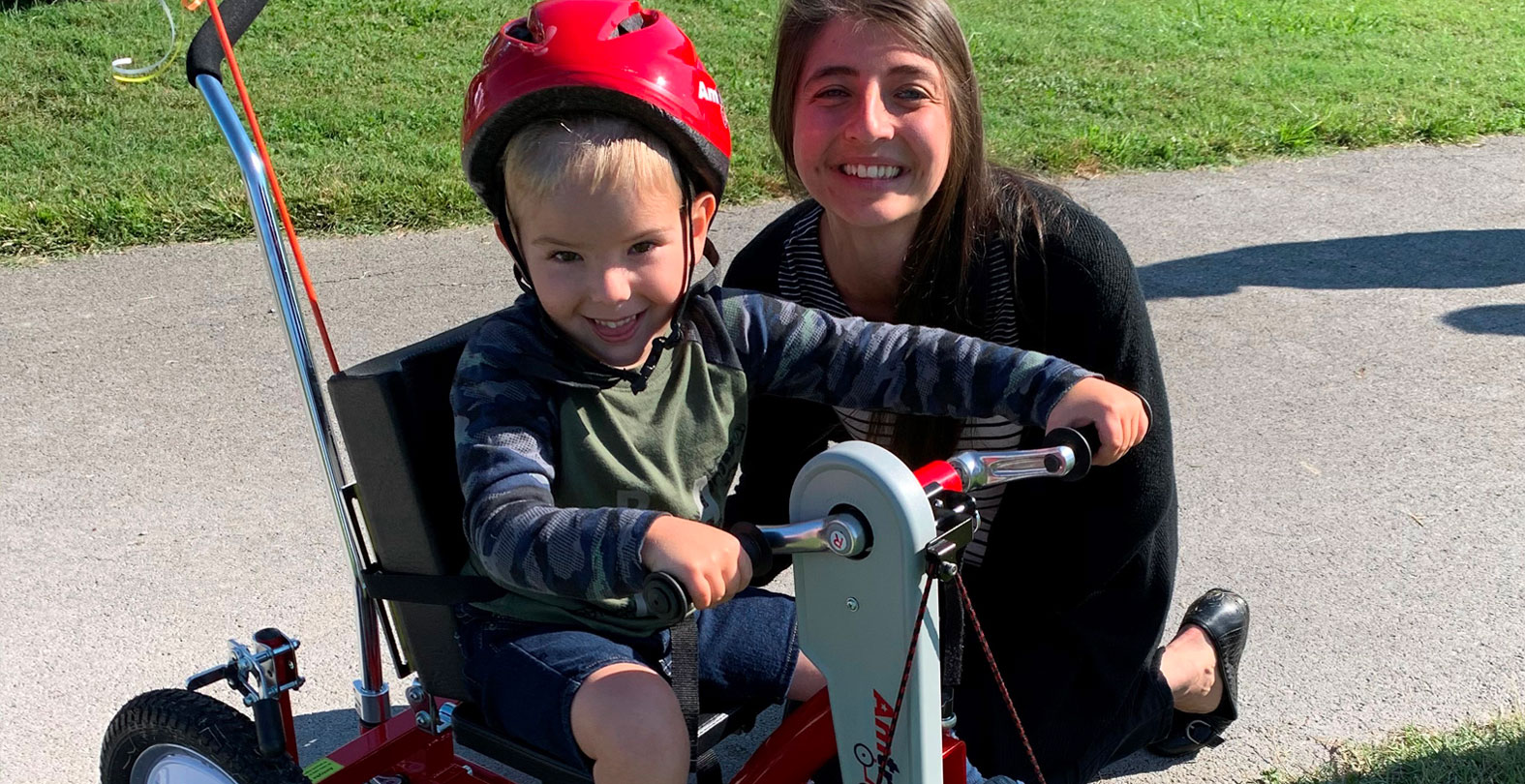 “He is just a ray of sunshine,” said physical therapist Hannah Wells, who has treated 5-year-old Jaxton for one year.

He’s a prankster, she said, known to place a two-inch plastic cockroach on an unsuspecting target’s shoe or head. Or he might try to get someone to sit on it.

“He just brings a lot of positivity and happiness to the clinic,” Hannah said.

That indomitable spirit belies the severe challenges that Jaxton has faced since being born with spina bifida and clubfoot. He was born with his legs straight up, such that the bottom of his feet could touch one another. “His praying feet,” his parents called them.

It has been a harrowing journey for Jaxton and his parents, Cassi and Dusty, who live in Sevierville, Tenn., near the Dollywood amusement park.

But with their religious faith, support from the Shriners organization and Drayer Physical Therapy, the Williams family is more optimistic than ever about Jaxton’s physical potential.

Whereas it was feared that he might be born paralyzed from the waist down, Jaxton can walk with the aid of a walker and continues to make progress in physical therapy. He likes to ride his bike, swim, fish, play T-ball.

Cassi recalled the sense of excitement she felt after their first meeting with Hannah in May 2020. She hadn’t anticipated that Hannah would set such “large goals for him.”

“Hannah definitely has been life-changing for Jaxton,” Cassi said.

Jaxton was born by a gestational carrier. A week-20 ultrasound revealed his spina bifida, in which the spinal cord fails to develop properly, and clubfoot, in which the foot is twisted out of position.

Jaxton underwent a spine closure operation as soon as he was born. In all, he has endured eight surgeries, mostly for revisions to a brain shunt that was inserted to treat swelling caused by excess spinal fluid. The most recent surgery, in October 2020, was for a total foot reconstruction.

Some of Jaxton’s obstacles were avoidable. Improperly fitted leg braces caused his leg bones to grow crookedly. The corrective “boots and bar” braces meant to hold Jaxton’s feet in proper position caused open sores on the back of his feet. The doctor and the brace manufacturer pointed fingers at each other.

Meanwhile, a friend suggested the family reach out to the Shriners fraternal organization.

Volunteers from the Great Smoky Mountain Shrine Club drove them to the Lexington hospital for Jaxton’s first appointment around Halloween 2016. Inexplicably, it was the first time anyone had taken X-rays of Jaxton’s feet. The images revealed the extent of the damage caused by the poorly fitting braces, but the doctor was confident that the bones could be straightened over time.

Jaxton spent the first three years of his life receiving physical therapy treatment at East Tennessee Children’s Hospital. Cassi said his progress stalled in the year between his discharge from the hospital’s PT program to beginning with Hannah, when Jaxton had intermittent in-home therapy and therapy at school.

‘Nothing they can’t accomplish’

The mother of a classmate who already was a patient of Hannah’s referred the Williams family to her and Drayer, where he receives treatment for one hour, twice a week.

Hannah, who specializes in pediatric care, said she sets expectations high for children but with the understanding that they like to have fun while they work.

“Children are hard workers,” she said, “and with families that love and support them, there’s nothing they can’t accomplish.”

When he first arrived, Hannah said, Jaxton mainly got around using a manual wheelchair or crawling on his hands and knees. While there’s nothing inherently wrong with crawling, Hannah said, being upright “just opens up your world.”

Starting treatment with a walker and braces, Jaxton took small, slow steps. But his personality is such that he is always willing to try something new without complaint, Hannah said.

One year later, he is bold enough to charge up a two-inch ramp in his walker, or what Hannah described as “off-roading,” compared with limiting himself to the carpeted floor.

In the coming months, Jaxton will begin using forearm crutches, essentially little canes with cuffs on top that go around the forearms. The crutches will enhance his mobility; for instance, making it easier to get out of a car and walk outside.

Hannah envisions a continuing relationship between Jaxton and physical therapy, to help with any equipment or bracing needs, injuries or pain.

Hannah anticipates that she will work with Jaxton for the next few years, helping him as he continues to grow, as his body changes, and as his skill set changes.

Clearly, the bond between clinician and patient is deep. One day, Cassi mentioned that she wanted to get Jaxton a bike. It was Hannah who coordinated the effort with the local Kiwanis Club.

The gift is noted in the four-minute video presentation of his story that Jaxton brings with him to Shriner clubs as a patient ambassador. Narrated by Cassi, the video includes a photo from the day that Jaxton received his bike.

He is seated on it; Hannah is smiling behind him.